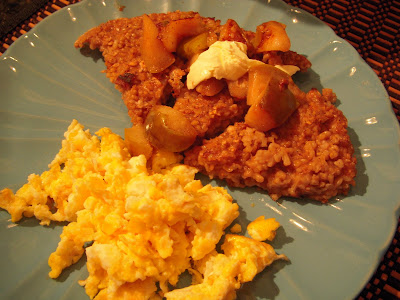 I can't help the horrible picture. Sadly, I almost didn't post this recipe just because of the picture but they turned out so good that I just had to share! The camera and light box isn't working out. I gave up on having a decent picture until we can afford a better camera. There may be a few that turn out decent but, it's like my hair lately, I'm going to let it get away with doing what it wants when it wants to!
We have been trying to get away from eating so much bread lately. I think people rely way to much on a simple piece of bread when there are so many other grains out there that are so good! As much as I like baking, I have committed to incorporating other grains in our diet. Then there was the weekend- I wanted french toast for breakfast and when I looked at the loaf of bread in the pantry it screamed at me "always relying on bread huh??" well, I told it!

Directions:
1. Combine the oats, water, cinnamon, and sweetener in a medium pot, bring to a boil. Once boiling slightly turn the temp. to low and let simmer for 30-40 minutes. The oats will be really thick.
2. Spread the oats in a square baking pan and cool in fridge for about 30 minutes.
3. Cut the oats in squares or whatever shape you so desire.
4. Heat skillet and spread coconut oil around to cover skillet. Place oat squares on skillet and "fry" for 3-4 minutes each side until browned.
5. Serve warm with a bit of agave drizzled on top! We also sauteed some pears to go on top!

I used to make these for the families I would cook for back when I personal chefed..it brought back memories, enough to make me cry! They were good. After all the times I made them I never actually tried them! :) Now I have.
Email ThisBlogThis!Share to TwitterShare to FacebookShare to Pinterest

You may enjoy these as well...